We were so lucky to be sent a copy of The Really Abominable Snowman (all opinions in this review are our own!) by the very lovely Valentina Mendicino and it’s just so good! This is her second book, published by Walker Books, and is the story of a really abominable snowman who isn’t really that abominable, he’s actually rather sweet! 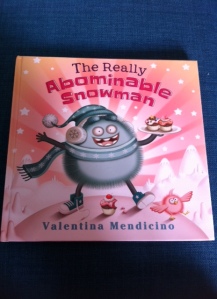 Way up high up in the Himalayas lives a horrible creature who is huge, horrible and very hairy. He eats children and smells like old cheese. People run away from him in terror. . . its the really abominable snowman! Or is he? He prefers to be called Milo, he washes in lavender soap, is very neat and much prefers eating cupcakes to children! Just because he LOOKS scary, doesn’t mean he is! Even other misunderstood creatures don’t give him a chance until he meets someone that just might be the friend he’s been looking for!

Illustrations: Milo is just so cute! The illustrations are so quirky and the attention to detail is brilliant. Milo has fuzzy fur which you feel like you can almost reach out and touch it. Each time you look at the images, you see more things you didn’t see the last time you looked! From the sprinkles on the cupcakes, little stars on shoes and an actual article on the newspaper, it will keep your little snowmen occupied for a while, spotting the little extras! Beebop’s favourite was the pictures on the wall in Milo’s cave.

You really feel sorry for Milo, he’s just heart meltingly cute! Beebop was totally mesmerised by him and kept reaching out to stroke the page! It’s the first story we’ve read with hints to Twitter and Facebook, but with an innocent twist, which makes it something different! It also teaches children that you shouldn’t judge a book by it’s cover (except this one, it looks brilliant and it is brilliant!) and we shouldn’t change as we’re all brilliant, just the way we are!

We’d definitely recommend this book as a Christmas present for little monsters. It would be perfect to read whilst snuggled up under a blanket on Christmas Eve, waiting for Father Christmas! It’s also very gender neutral. On first glance, a blue abominable snowman might make a mummy or daddy think of the book as more for boys but Milo bakes, does crafts and has a pink cave that most girl monsters really wished they had!

Daddy Beebop actually said it was his favourite book of all time and he was laughing all the way through. We already have a Milo but he wouldn’t say no to being friends with a cuddly, lavender smelling snowman!

Valentina has a Twitter, her own website where you can buy your own copy of The Really Abominable Snowman (sadly, no cherry cupcakes though!) as well as her other works and a blog too! Thank you for sending us a copy, we really do love it and it’s definitely one of our new favourites.