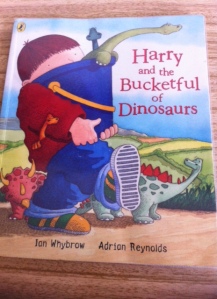 Hello everyone! Last night, Beebop and I read “Harry and the Bucketful of Dinosaurs” (daddy’s pick!) This book was the Picture Book winner of the Sheffield Children’s Book Award, so we were expecting good things!

Illustrations: The illustrations reminded me very much of Nick Butterworth’s Percy the Park Keeper books, which is always a winner to me. I particularly liked the dinosaurs expressions!

Story: Harry helps his nan clear out the attic, and discovers a bucketful of dinosaurs! From then on, he cares for them and takes them everywhere with him. Until one day when he leaves them on a train. This bit really got me as it reminded me of a teddy bear I had when I was little and he went everywhere with me too, I left him in the cinema after watching Toy Story (guessing my age there?!) and cried all the way home until my very exasperated dad turned the car round and went back for him! The thing I really liked about this story, is that Harry wants to know the names of the dinosaurs. He doesn’t immediately jump on a laptop or an Ipad, he goes to the library. With all the funding cuts libraries have had in recent times, I think it’s great that libraries are being used in a children’s story. Most of Beebop’s books are from our local libraries and she got her first library card at 5 weeks old. If our libraries don’t get used, they shut down and that’s a real shame.

Overall, I loved this story, from the illustrations to the dinosaurs’ faces when they were left on the train. It reminds me very much of Toy Story. I think it’s a great book to read and get young children researching in libraries and learning about history, to get their imaginations going!